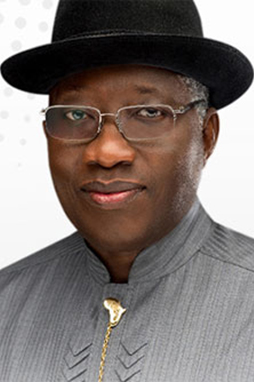 H.E. Dr Goodluck Jonathan is a distinguished scholar and holds a Bachelor’s degree in Zoology, a Master’s degree in Hydrobiology and Fisheries Biology; and a PhD in Zoology from the University of Port Harcourt, Nigeria. He began his early career as an Environmental Protection Officer, before becoming a Lecturer, and later an Education Inspector. In 1999 his political career kicked off that saw him become Deputy Governor, then Governor of Bayelsa State in 2005. In 2007 he became the 12th Vice President of the Federal Republic of Nigeria and in 2010 became the 14th President of the Federal Republic of Nigeria.

Since his concession of the 2015 Nigerian presidential elections, the H.E. Dr Goodluck Jonathan continues his leadership as a senior statesman. He has been honoured with international awards and has been frequently invited to deliver keynote remarks at global conferences on many subjects, from peace-building to improving educational opportunities. He is particularly sought-after as a champion of democracy, and recently led international election observation teams in Liberia and South Africa. He is currently leading the ECOWAS mediation team involved in trying to resolve the Mali political crisis.

A strong believer in quality education, he is quoted saying, "If we do not spend billions educating our youth today, we will spend it fighting insecurity tomorrow. And you do not have to spend on education just because of insecurity. It is also the prudent thing to do."

His Excellency was appointed following a rigorous search among eminent African leaders distinguished for their ingenuity and commitment to the promotion of Education and Social Development in Africa, and following the recommendation of the University's Advisory Council.